We give you the best answer with the special offer for your holiday to I Pretti R.T.A. Request

Built in 1873, by the Genoese industrialist Eugenio Pretto, for the conservation and processing of sardines, the artisan factory called "I Pretti" with the distorted name of its builder, was sold in 1874 to the most inspired entrepreneur of the Florio family, Ignazio Senior.

The simplicity of the stone. The harmony of colors.

All this, without renouncing the privacy, tranquility and glamor of an unforgettable holiday.

Favignana is one of the three islands of the Egadi archipelago in Sicily, together with Levanzo and Marettimo and the Maraone and Formica islets.
At 15 thousand miles west from the coasts of Sicily, the archipelago of the Egadi islands with its 1523 sq km, since 1999 it is the largest marine reserve in Italy and its sea, for the hydrodynamic conditions of the seabed, is among the most clear and clean in the Mediterranean. The charm of I Pretti R.T.A. , finds its maximum expression in the attention to detail, in the elegance and strong personalities of its 16 Suites, of which 13 with direct access from the courtyard garden.
In the heart of the R.T.A., a few meters from the intense life of the marina and the center of Favignana, there is an enchanting Mediterranean garden, over 2000 square meters, lush and quiet, where you can have breakfast, you will have the opportunity to have a drink and relax under the blue sky or under the stars. A few steps are enough to look out into a particularly suggestive environment that recalls the atmosphere of the bridge of an ancient cruise ship.
It is the terrace of I Pretti R.T.A. , refined by carpets of original nineteenth-century tiles and overlooking the intense blue of the sea overlooking Levanzo. A privileged position to dominate the entire gulf of Favignana from above, with a view of the Florio Palace in Art Nouveau style, designed by Damiani Almeyda for the Florio family, the Port, the fascinating ancient Florio Factory and the Castle on the mountain of Santa Caterina. 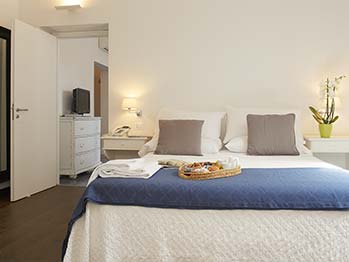 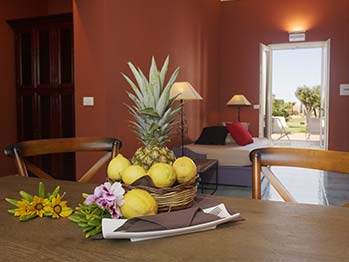 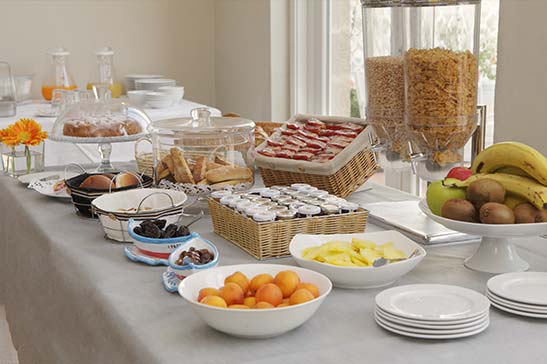 Healthy and tasty, every morning...

...our breakfast served with sweet and savory products carefully prepared by our staff. The breakfast buffet includes sweet, salty and warm flavors, to satisfy the different eating habits of our guests.